Higher highs and higher lows throughout 2019.

Cocoa rises to the highest price since mid-2018.

A $400 surcharge is making a difference.

Levels to watch on the upside.

NIB for cocoa bulls that do not trade futures.

Looking for more stock ideas like this one? Get them exclusively at Hecht Commodity Report. Get started today »

Cocoa is a commodity that thrives in climates around the equator. Therefore, the West African nations of the Ivory Coast and Ghana supply over 60% of the cocoa beans to the world each year. As crude oil is the driving force of many economies in the Middle East, cocoa beans have the same role in West Africa. As an agricultural commodity, the weather conditions and crop diseases often cause supply disruptions when it comes to the primary ingredient in chocolate confectionery products. Political stability in West Africa can also cause problems when it comes to periods of violence that can impact the workforce as well as the logistics of moving the beans from farms to ports for exportation. At the same time, the population growth in the world, along with economic growth in China has increased the addressable market for cocoa beans. Each year, cocoa supplies can vary in a world where requirements continue to grow.

The most direct route for a risk position in the cocoa market is via the futures and futures options that trade on the Intercontinental Exchange. The iPath Bloomberg Cocoa Subindex Total Return ETN product (NIB) replicated the price action in the cocoa futures market.

Higher highs and higher lows throughout 2019

Cocoa has been trading in mostly a bullish pattern throughout 2019.

As the weekly chart highlights, the price of cocoa has been grinding higher throughout 2019. The price spike to the downside to $1901 per ton in early March was a short-term event as March futures rolled to May. Cocoa experienced a six-week correction that took the price from a new high for the year at $2602 in early July to a low at $2089 per ton in mid-August. Since then, the price has made progress on the upside, reaching its most recent peak at $2783 on Monday, November 18. Price momentum and relative strength indicators have moved into overbought territory on the weekly chart. Open interest at 322,008 contracts on November 20 was at a new record high. Rising price and increasing open interest is a validation of a bullish trend in a futures market.

Cocoa rises to the highest price since mid-2018

The most recent high in the cocoa futures market took the price to $2783 per ton, the highest level since May 2018.

The monthly chart illustrates that the next level of technical resistance now stands at the 2018 high at $2914 per ton.

Price momentum and relative strength were trending higher towards overbought conditions on the longer-term chart. Monthly historical volatility at just below 22.50% is a sign that the rally in the cocoa market has been slow and steady.

A $400 surcharge is making a difference

Since the vast majority of global cocoa supplies come from the West African countries of the Ivory Coast and Ghana, the sustainability of supplies is a primary consideration for the world's chocolate manufacturers. At the same time, the labor situation in Africa has caused farmers to employ child labor from countries throughout the continent. To ensure futures supplies and stop child labor abuses, the Ivory Coast and Ghana have suggested a surcharge on cocoa that would allow for better pay and support farmers throughout the region. The world's leading cocoa consuming companies have backed the idea of a $400 per ton surcharge on cocoa from the two countries that supply over 60% of the world's cocoa. The potential for a surcharge has supported the price of the soft commodity. At the same time, recent rains in key growing regions in West Africa that could weigh on supplies has caused the rally that sent cocoa through technical resistance levels on the upside.

The next big event for the cocoa market will be the December 12 general election in the United Kingdom. London has long been the hub of international cocoa trading, and many of the physical supply contracts use the British pound as a pricing mechanism. When the pound rallies, cocoa prices tend to strengthen.

Most recently, the pound has been flirting with the $1.30 level against the US dollar, which has provided support for the price of cocoa and lifted the soft commodity to its higher level since May 2018. If Prime Minister Boris Johnson wins the general election and succeeds in taking the UK out of the EU with a deal by the end of January 2020 deadline, the pound could rally and provide further support for the price of cocoa.

Levels to watch on the upside

An end to uncertainty over Brexit that lifted the value of the British pound, a $400 per ton surcharge on cocoa exports from the Ivory Coast and Ghana, and supply issues could create a perfect bullish storm in the cocoa futures market.

The quarterly chart of cocoa futures shows that price momentum and relative strength continue to display bullish trends. The price of cocoa has been moving higher over the past two decades. At the turn of the century, the price traded as low at $674 per ton.

NIB for cocoa bulls that do not trade futures

I remain bullish on the prospects for the price of cocoa. If the stars line up for the soft commodity, I would not be surprised if the price rises to a new record high above the $4000 per ton level. Chocolate is a product that is not all that price elastic. Chocoholics around the globe would not limit consumption even if the price were to double. However, I would only buy cocoa on price weakness as markets rarely move in a straight line. It would take a significant supply disruption to cause a one-way move to the upside in the cocoa futures market. Meanwhile, there is a sign that the supply-demand equation in the cocoa market is tightening. 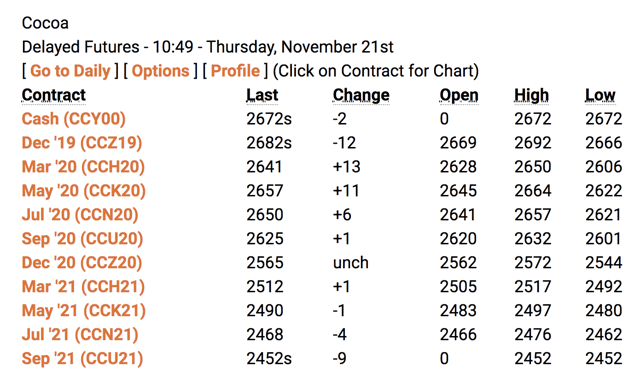 The forward curve of the ICE cocoa futures market shows that the market has moved into backwardation. Cocoa for delivery in March 2020 was at $2641 per ton on November 21 with cocoa for delivery in March 2021 at $2490, a $151 per ton discount to the nearby futures contract for the one-year spread. Backwardation is a sign that market participants are concerned that nearby supplies will not be sufficient to meet demand. Meanwhile, the supply of cocoa in 2021 will come from pods on cocoa plants that will not begin to grow for quite a while. Therefore, the price for delivery in September 2021 is little more than a leap of faith at this point.

The most direct route for a trade or investment in the cocoa market is via the futures and futures options that trade on the Intercontinental Exchange. The iPath Bloomberg Cocoa Subindex Total Return ETN product does an excellent job tracking the price of cocoa futures. The fund summary for NIB states: 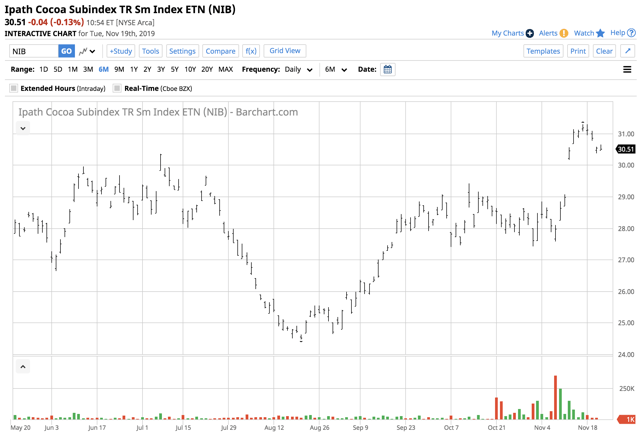 Over the same period, the NIB ETN product rose from $27.58 to $31.29 per share or 13.5%. The slightly lower appreciation in the ETN compared to the nearby futures contract could be the result of the roll from December to March 2020 futures.

The price of cocoa futures continues to march to the upside. I favor buying cocoa futures, options, or the NIB ETN product during corrections as the soft commodity is likely to continue to make higher lows and higher highs over the coming months.

The Hecht Commodity Report is one of the most comprehensive commodities reports available today from the #2 ranked author in both commodities and precious metals. My weekly report covers the market movements of 20 different commodities and provides bullish, bearish and neutral calls; directional trading recommendations, and actionable ideas for traders. I just reworked the report to make it very actionable!

Disclosure: I/we have no positions in any stocks mentioned, and no plans to initiate any positions within the next 72 hours. I wrote this article myself, and it expresses my own opinions. I am not receiving compensation for it (other than from Seeking Alpha). I have no business relationship with any company whose stock is mentioned in this article.

Additional disclosure: The author always has positions in commodities markets in futures, options, ETF/ETN products, and commodity equities. These long and short positions tend to change on an intraday basis.

Gas Buddy
Comments6 | + Follow
Very informative. never looked in cocoa before.
22 Nov 2019, 07:13 AM Reply 0 Like
Disagree with this article? Submit your own.
To report a factual error in this article, click here.
Your feedback matters to us!